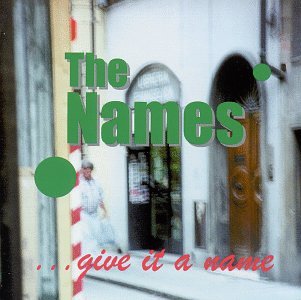 The Names are a San Francisco Bay Area trio, mixing a concoction of catchy melodies, jangled textures, and big vocals into heady songs, always with a hook, and usually with some discrete sophistication. They blend all this in one post-modern sounding band, using electric guitar, bass, and drums.

The new record features the same complex blend of vocal harmonies that made the group such a local success.

The Names have opened for the likes of Gene Loves Jezabel, Vic Chestnut, and Mark Curry. They also earned "favorite local band" recognition in San Luis Obispo in 1993, a result of their debut EP entitled "Ashley". The Names unveiled their most recent full-length album entitled "Give It a Name" in 1998. The Names are currently promoting "Give It a Name" in the San Francisco Bay Area and Central California markets; the venues are growing, and their web site is approaching ten thousand hits. The Names recent live appearances include headlining the Club Cocodrie, Lost and Found Saloon, Irelands 32, and the Coco Club in San Francisco, Hooligan's in Dublin, California, Abernathy's in Walnut Creek, California, and SLO Brewing Company in San Luis Obispo, California. BAND_MEMBERS: Mick Cerda--Bass/Vocals John Chacon--Guitar/Vocals Eric Johannesson--Drums

Get the hottest holiday gifts

See all Get the hottest holiday gifts
Featured
Deals made easy all year long.
Free shipping. Best prices.
Get your thing
Get your thing

Today's Deals – All With Free Shipping